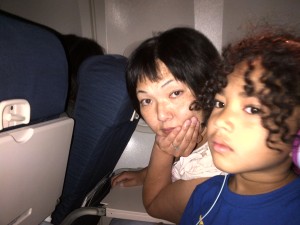 After two weeks of house sitting (thanks Terry, Tanya, and Sandeep!) and months of packing, we set out on our journey from SFO (San Francisco, CA)  to NKM (Nagoya, Japan), with a pit stop in ICN (Seoul, Korea).  Itoko was able to book our flights for less if we flew to Korea first, so we opted for this route, as opposed to going direct.  Maya is a pretty experienced flyer (for a 5 year old), but this was going this trip was going to take a total of 20 hours, so I was a bit nervous. The first leg was about 12 hours, then we would have a 5 hour layover, and then we would take an hour flight to Nagoya.

Getting to the airport was a breeze and my mom (Denise Jenkins aka Weezy) was able to make a last minute visit to SF, so she helped us drop off the rental car and get to the airport. Maya was surprisingly excited, which also made it easy to get from the rental place to the airport. Prior to the trip, she had a few breakdowns and expressed that she didn’t want to move, so I thought that actually going to the airport would be a problem. She was a trooper though and the excitement of going to see her cousins and obaachan (grandmother) won out, so we made it to the counter with no issues. We ended up shipping most of our stuff, but we still had 4 large suitcases, 3 small suitcases, and 3 backpacks and the lady did not look happy with us…lol

We knew we were going to have some overweight bags, but didn’t think we could do anything about it, since we tried our best prior to the trip to ship as much as we could. We ended up shipping 93 boxes and doubling our shipping cost, plus we forgot a few items (snowboard, a pot top, etc.), so we were basically stuck with heavy bags and some extra costs. Quickly repacking a bag or two helped out a little, we got our tickets and headed to the gate. After that, it was a standard process, and we boarded the plan for the first leg of our trip. Outside of a small delay, United got us up in the air almost on time.

Once in the air, we all got settled in and they eventually served meals. Maya is particular when it comes to eating and has tree nut allergies, so this can sometimes be a stressful time. I didn’t think to request the kids’ meal and Itoko was too busy, so we had to settle for trying to get her to eat the regular meal. The options were chicken (in a tomato sauce) and lasagna, both of which are a no go for Maya, but Itoko had brought a few snacks just in case. She also had something before we took off, so we were ok for now. This could end up being a problem, but Itoko is always planning ahead (thank goodness), so we ordered a snack pack, and we had an apple.

The flight went smooth and it was time for the second meal (and almost time to get off the plane!). Maya and Itoko slept most of the way, while I read and took advantage of the onboard internet. When the second meal showed up, it was about 9pm (PST), but morning in Korea. I wasn’t sure about the meal, but was relieved that we had only an hour or so to get off the plane so either way, Maya would get something to eat. She was also a bit groggy, so it was possible that she may not be ready to eat. I was pretty hungry and interested in what our choices were. As the lady came down the aisle, Itoko and I were both in amazement when she said, “Eggs or Meatloaf!”